Once upon a time a weirdo named Avalyn decided she wanted to make a quilt. Avalyn had never made a quilt before, but she didn't think it could be very difficult if she chose to use a patchwork pattern that was all straight lines. Really, how hard could it be? 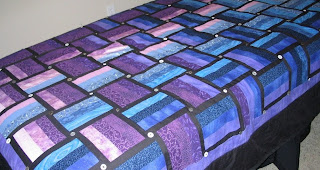 And so Avalyn sketched out a basket weave pattern for her quilt on graph paper. However, she made two bad decisions: first she decided to make a QUEEN-SIZED quilt instead of starting with something small like a pillow or baby blanket. Second, she thought it would be awesome to button-tie the whole blanket instead of using yard or stitching-in-the-ditch. between each square

What she failed to realize was how PAINSTAKINGLY LONG it would take to complete this project. 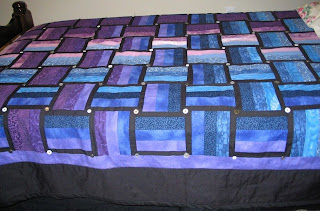 But there was a happy ending! Two years later, Avalyn finally sewed on the last button!

The blanket small enough to cover a twin bed but large enough to look good on a queen-sized bed as well! It now adorns a bed in her guest room.
Posted by Avalyn at 9:00 AM