This is the first teddy bear I have ever made! Don't you just want to squeeze him? 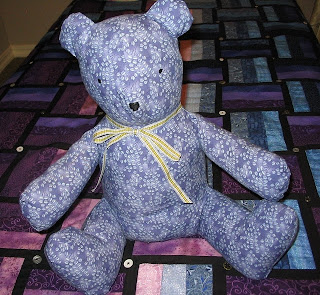 Since I had never made a stuffed animal before, I used a store-bought pattern. I already had some fabric leftover from a nursing cover I made for a friend a couple of years ago, plus I had a ton of stuffing just taking up space in my closet. 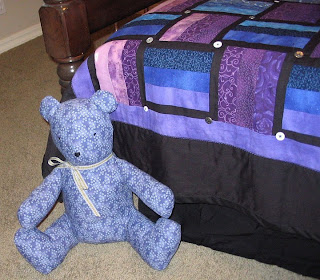 I added the bow around his neck afterward but I think he might need something else... a bigger bow? A necktie? Bow tie? Scarf? Maybe he needs something more... geeky.

Oo I just had an idea! I bet I could make stuffed animals out of old T-shirts. I think I have some freebie Microsoft Windows T-shirts lying around somewhere that would look cute... perhaps as a bunny...
Posted by Avalyn at 9:00 AM