I found this book Crowns & Tiaras: Add a Little Sparkle, Glitter & Glamour to Every Day and it inspired me to make these crowns.  I used a headband as a base and some wallpaper because it's often textured and always longer than your average scrap paper.
This was the first crown I completed.  The shape was copied from a previous failure. 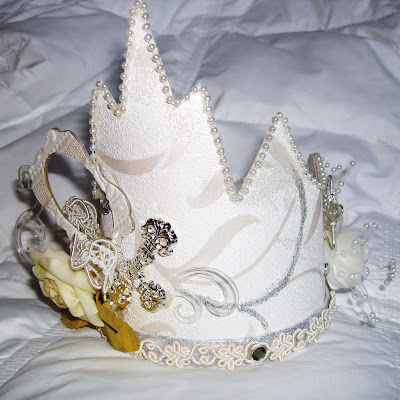 At first adding the beaded strings seems like something good to do because it's just pretty.  After it was completed I learned of a awesome second purpose for the beaded string.  Strength.  It helps the paper keep it's shape, like hat wire for hats.  This makes the crown less prown to bending, thus durable which is always a bonus when working with paper.

and pictures of the sides. 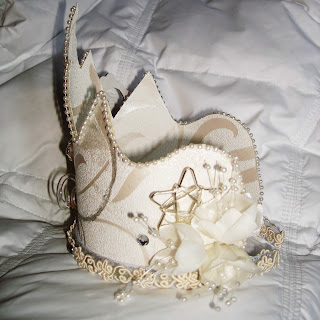 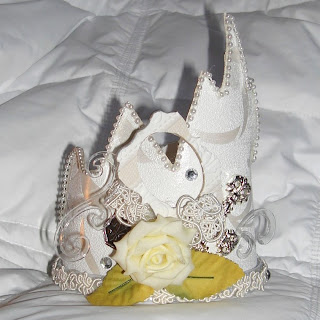 I tend to put these crowns on the side of the table; not the focused project of the table but always in view.  As I come across objects that would look cool I would add them until I feel the crown is complete.

This is a current crown I"m working on, red and black is the theme.  I originally wanted to put more stuff on it and but I actually like it the way it is.  I'll let it sit longer and if i find something that matches well I'll add it, if not I will let it remain the way it is. 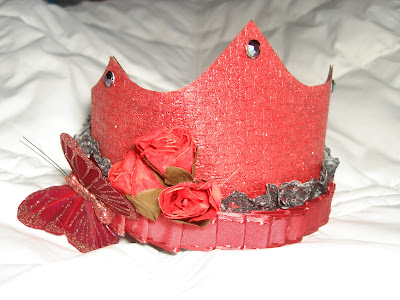 This is another crown I have sitting on the side for now.  I really dont know what to add to it for now, but maybe in two months I'll be able to repost it in it's beautiful ending state. 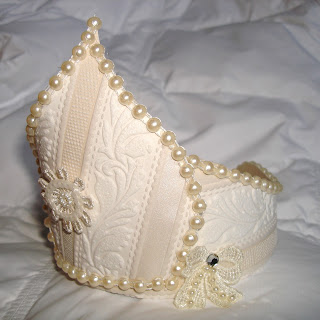 Posted by SmallRiniLady at 12:35 PM