Today we'll be focusing on the feather skirt on the left side of Lightning.  I dont know what to call it, I thought of it as a wing, but a girl on DeviantArt referred to it as a feather skirt which sounds more appropriate.  This project ended up turning out a lot better than I assumed it would and costed less than I assumed.  I bought $25 in feathers and ended up only using 2/3s of it. 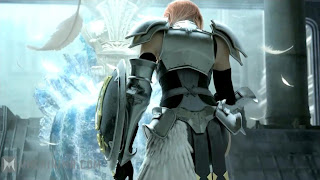 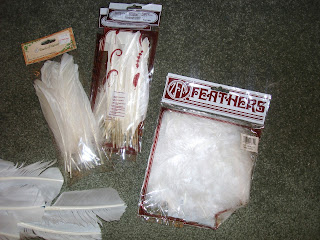 1)      Cut out a piece of buckram in the shape of an outline of the wing.  It will serve as the backing for the wing, and we will be trimming it later 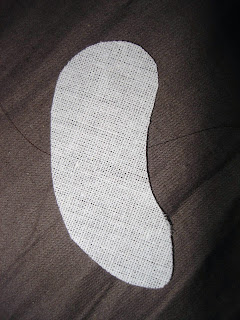 2)      We want a single feather to be our tip, start with one large feather and lay it pointing out of the bottom tip of the wing, remember that the buckram is serving as our outline so stay inside the lines.
3)      Glue the tip of the bone to the buckram.  We want to limit how much glue we use for several reasons.  A) more glue means more weight which adds no value.  B) more glue down the bone means less freedom for it to shift in the wind.
4)      From there we continue moving up arranging and gluing the large feathers. Follow these arrangement guidelines.
a.       The bone tip should be near the vertical center of the buckram.  Never glue near the edge of the buckram.
b.      Arrange the feathers in different angles but all pointing down (South, Southeast, or Southwest).  Making them all parallel will make it look too manicured.
c.       Don’t put them all in a row, vary the vertical and horizontal placement of the feathers 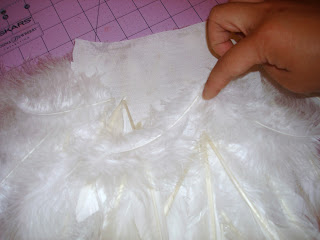 5)      Once you’re done with the large feathers you can begin mixing feathers.  Start off my covering a horizontal area* with the fluffy feathers to completely cover up the buckram.  Keep the same guidelines as above, especially not gluing to the edge of the buckram. 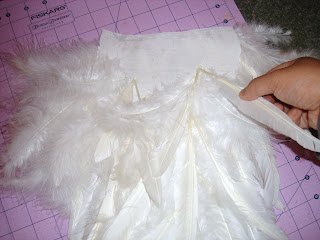 *Only do one horizontal area at a time so you can layer the feathers on top of each other as you continue up.
6)      Lay a few of the trimmed feathers on top of the fluffy feathers.  You can mix the medium and small feathers, or you can use the medium first and the smaller ones up north.  Up to you.
7)      Repeat steps 5 and 6 until you’ve reached the top.  Because the top line is covered up my the belt for lightning you can skip this step, but I’ll include it for anyone who’s making a wing for other projects. Cover the top row with fluffy feathers.  In this case they should point to all different direction and glue up and past the edge.  The fluffy feathers should use one another to try to cover up their bones. 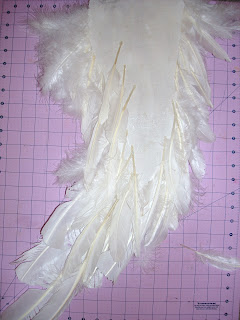 8)      Now you’re complete with one side of the wing.  Time to start trimming.  We want to trim off as much of the “boarder” of the buckram so that the feathers on the edge are hanging off.  I try to cut off as close to any glued spots as possible.

Depending on your project you may not need a back, or you may need to only fill up a portion of the back, or may need to fill up all.  Just remember to think about your cosplay being viewed from all angles of a sphere.  In the case of Lightning, pieces of the inner side of the wing will be visible as I walk, so I do want to cover it up. 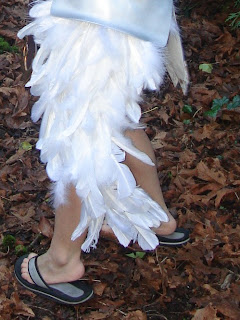 Posted by SmallRiniLady at 9:18 AM