This is the first hat I've made from scratch, including the frame.  I fell in love with a Tricorne hat I found on the head of a steampunk cosplayer at SteamCon. 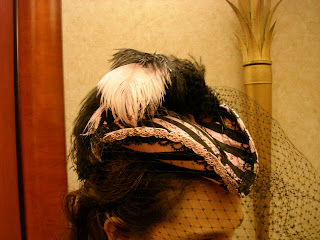 So I liked how real tricornes have the bowl shape curve for the head instead of those ~cheaters~ who make the middle stick out like a top hat.  I was able to get this shape by molding the buckram in a bowl and letting it dry.  Buckram is covered in starch and can be stretched and shaped wet and will stiffen in that shape when dried.  Or course being me it had to be a mini hat :) 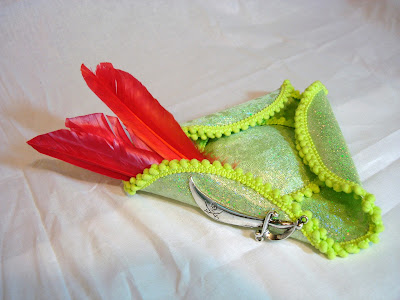 This was definately a lot of *firsts* in this project.  It was the first time I used fabric glue.  I didn't want to stitch on the trim, just cause it makes it look less magical.  So I tried fabric glue.  Wow I'm impressed at how well it worked. 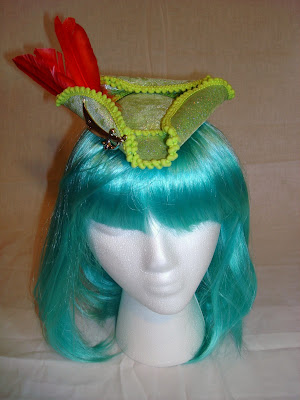 Being my first time and expecting to fail I used fabric scrapes; because the hat ended up turning out better than I expected I was now stuck with this sparkly green hat (Previously used for a TinkerBell costume).  Um how to make this less flamboyant and more cool.  Looking online at some other tricornes I noticed a lot of them used feathers.  So adding some red feathers, and oh a pirate sword, and that's how I got my Peter Pan theme.  Pretty cool huh?


When I started I said I was going to judge my success based on how much I wanted to make a second hat after I was done.  Like I said, I expected the first one to be a failure, but if I learned enough to make a better second one than that's considered a success.The fact that my first hat came out great means I met beyond my expectation. ~SCORE~
Posted by SmallRiniLady at 9:17 AM