Once a year Seattle has their Anime convention SAKURACON! And I have been attending this amazing convention since 2003. Every year it continues to grow (2010 had over 18 thousand attendees) and every year my cosplay count grows (This year I have at least 9). LOL

This week I will be present works from previous SakuraCons.  Instead of focusing on a the accuracy of a character I've decided to be more topical on cosplay enhancements and altered styles.

I may do an additional Cosplay Week after SakuraCon displaying some of my cosplays from this year. Dunno yet, see how I feel at that time.  Onto today's subject

I dont remember how me and Belinda (cosplay friend) came up with the idea, but I thought it was freaking hilarious.  We dressed up as female version of the Mario Brothers of Mario and Luigi (Belinda because she's taller).   Lolita Maid Style! 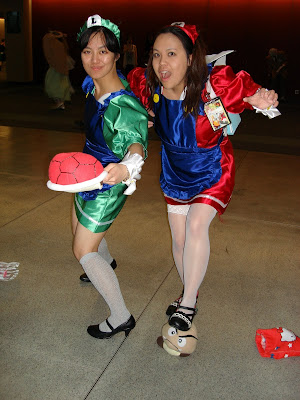 Belinda made some plushies to go with us.  She's throwing the turtle shell, you can tell she's a Mario Kart fan.

Posted by SmallRiniLady at 9:25 AM