So in a previous post I had shown a collection of anime card wrappers put together into a bag. Anime Trading Card Bag  But what to do with the cards?

I made a flapper dress out of the cards :)  Yea I know some of you are probably pointing at me and screaming "that's not cosplay".  Let's go back to the definition that had previously defined back in an earlier cosplay post.  Cosplay Week #1 - Melissa Seraphy

Thus this is a persona cosplay 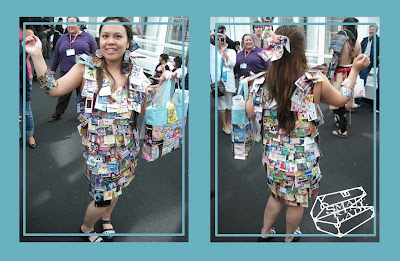 So how did I make it?  (feel free to yell at me, I deserve it)
Using hot glue was a bad idea, besides destroying cards by accident.  I was shedding cards like a dog sheds fur. People were trailing behind me picking up and returning my lost cards to me.
Posted by SmallRiniLady at 9:25 AM