Cosplay Week #5 - Ciel in a Reconstructed Dress, Ballgown to Lolita

So I have this weird habit of picking out cosplay ideas before even knowing who the character is.  That's because I fall in love with the outfits, which leads me to go dig up the series.

So here I fell in love with this, later to find out it's actually a young boy playing detective and dressing up as a girl in desguise.  LOL, but the manga was still pretty good so I continued my pursuit in making this outfit. 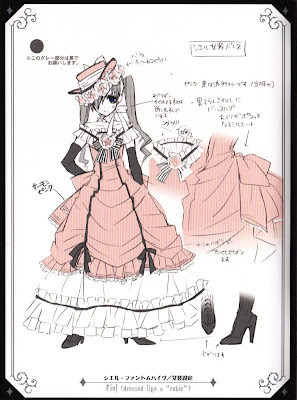 So I made this outfit for SakuraCon 2010.  This picture was taken at University of Washington when all the Sakura blossoms were in bloom. 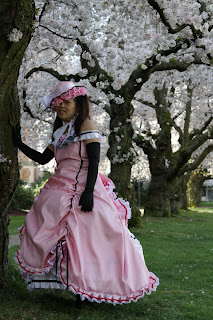 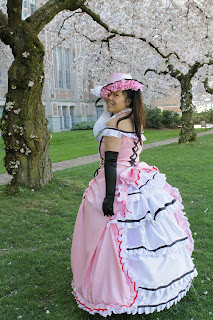 The outfit consisted of boots, black glooves, a gown, giant hoop skirt that was dolled up to be a petticoat, choker, and hat (that covers one eye).

So another tidbit about me.  I dont repeat outfits, well at least to the same convention.  So I can't wear this for SakuraCon 2011.

Meanwhile in a completely separate train of thought in my head.  There was this darling Princess Zelda who made her outfit into a Lolita style.  Here outfit was absolutely darling (note i used that word twice to describe her cause she was truely darling). 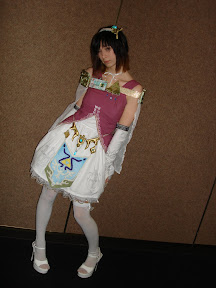 Smashing my two thoughts together and this is what we get.  Yay for silly thoughts.
So I ripped up my dress. 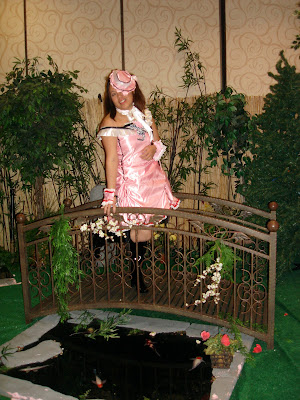 You might have already seen this picture from my AkiCon post back in Nov.  But I'm ready to show it off at SakuraCon this year.  I'm still deciding if i want to bring back the black gloves or keep working with the cuffs.
Posted by SmallRiniLady at 9:24 AM