Ever wanted to cosplay a boring outfit?  Here's a great tip of how to make your cosplay fun.  Create a story!

Me and a friend wanted to cosplay as Nurse Joy from Pokemon.  Unfortunately she was unable to attend the convention so it was just me. Nurse Joy is basically the veterinarian of the Pokemon world.  Her outfit isn't terribly exciting, nor is she an exciting character. 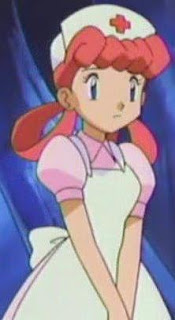 For Nurse Joy I decided to make my role interactive, play the part.  I got the idea from a JigglyPuff cosplayer from last year.  She was a larger person, so obviously not getting a lot of those “sexy” pictures.  But she played with it, making a Lolita representation of JigglyPuff, with a puffy petticoat, jiggly puff ears, and a microphone (from the anime).  Then she sang everyone to sleep and got mad.  She played the anime character of JigglyPuff that it was so much fun to hang out with her.

So I’m Nurse Joy.  What does Nurse Joy do?  She heals Pokemon.  ~Ding~ (idea lightbulb above my head).  I cut out some band aids out of craft foam and glued some knock out symbols onto some sunglasses. 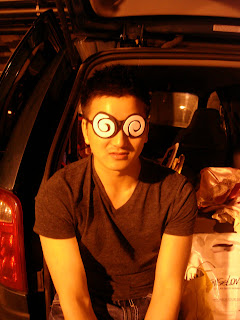 Here's one of my friends is wearing the Dizzy glasses  (there is another pair of Pasted Out glasses you'll see below). They are comfortable since they were meant to be eye wear.  But you couldn't see through them that's ok, since you can't see clearly anyways when your knocked out. 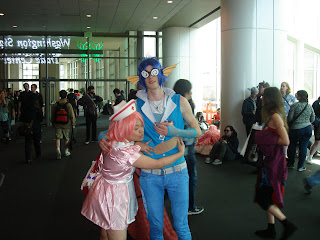 So I walked around the convention floor to find pokemon to heal (and random stranger cosplayer that was dressed up as a pokemon).  They I would freak out "Oh No your hurt!  Let Nurse Joy fix you" then I would proceed to put the glasses on them since they are hurt and put band aids on them (with double sided fabric tape as to not ruin their outfits). 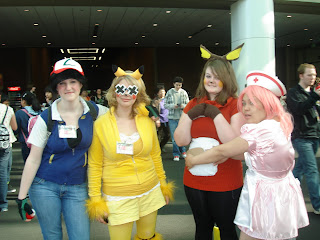 Found a Pikachu and a Raichu with their trainer Ash.  As you can see my outfit isn't made very well.  I was hoping that my play with the character would outshine the tragedy which is my sewing project.  I think it was rather successful at that.
Some of them were freaked out by me, having a stranger touching them.  But others found it absolutely hilarious and played along.
Posted by SmallRiniLady at 8:50 AM