My cousin is preggy with her first child. YAY, so I wanted to make her a plush Beaver (since we're Canadian) but I failed. So my second choice was a lion. 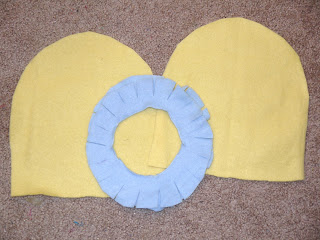 I'm going with this simple design (because limbs start getting compliated and can look just not that great without much practice). I'm using fleece because it's a very forgiving fabric, and very soft. It can strech to give you curves without having to pattern out just for curved shapes.

Two humps for the front and back, with a cute mane. The mane was made by cutting a donut shape, and snipping frige off the outter edge. I'm also layering two donuts to give me depth. 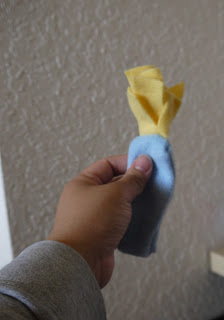 I also wanted a little fluffy tail. Doesn't it look a bit like a candle.
I cut a strip of frige from the fabric, rolled it up, and sewed it to the end of a tail. 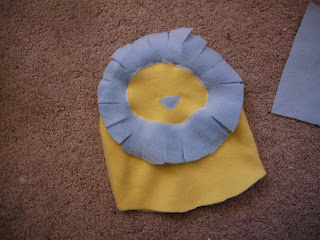 Using a Zig Zag stitch to attach the main and nose to the front side of the animal.  It's pretty trendy to allow seams to be show, gives a very home made organic look.  Instead of having a flat base, I made it curved to give it character.  It's cuter when you hold it, but now I realized it's got trouble standing cause it wobbles. 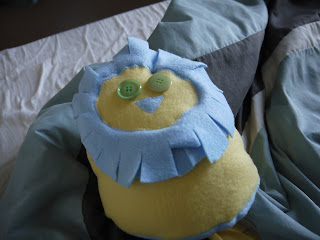 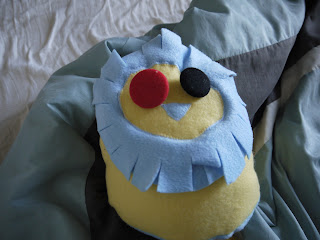 I went through different button combinations to figure out which eyes looked good on the lion. 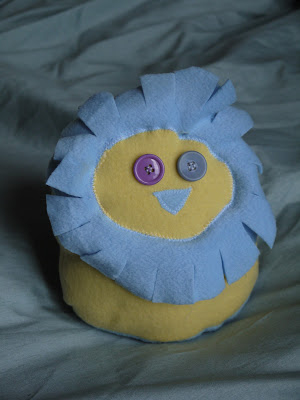 The Finished LIon,  It's it CUTE 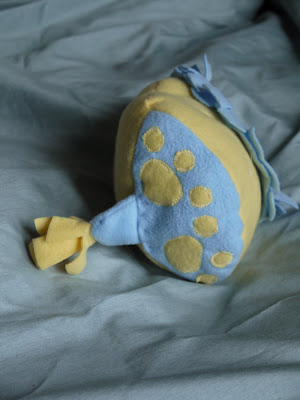 And of course it's got Paws ~giggle~
Posted by SmallRiniLady at 9:08 AM