Are you ready for the Avengers movie?

Meet my brother-in-law, Michael Mulligan. He is a professional actor and a pro at making movie props. He made this Arc Reactor and gave it to my husband (who is a big comic book fan) for Christmas back in 2008. HOW COOL IS THIS? 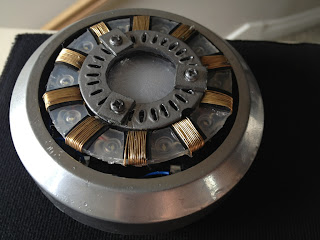 This is a completely handmade custom replica of Iron Man's "arc reactor". 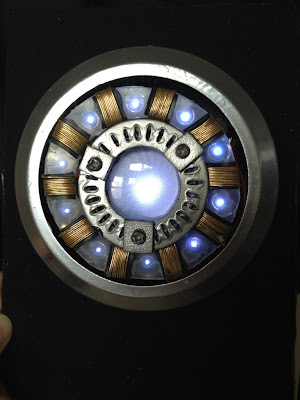 It lights up with LEDs! 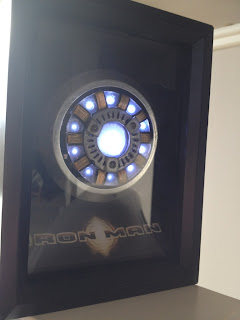 Michael also made this custom shadowbox and mounted it inside so it can be displayed in our living room. A cable runs out the back so I can plug it into the wall to turn it on instead of relying on batteries. 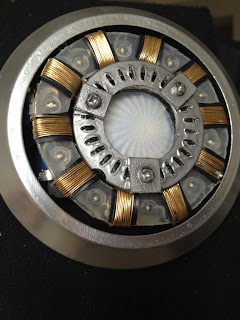 It looks amazing, whether it's turned on or off! 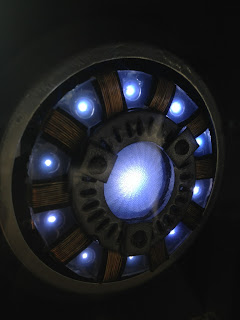 Seriously, how's this for a night-light? Every geek needs one!

Random Fact: if you have the Collector's Edition of World of Warcraft: Wrath of the Lich King, pull out the behind-the-scenes DVD. Michael's in it doing movement acting for undead warriors!
Posted by Avalyn at 9:00 AM 3 comments:

My Mom has a green thumb, and I've learned a trick or two from her. Back in high school we got a tomato plant, and it grew like crazy. We constantly had more cherry tomatoes than we could eat. This means we can have fresh off the vine tomatoes whenever we wanted.

So I'm going to retry this for this summer.  This whole set up cost me $4 USD, and if I can get two meals of tomatoes out of it, I've already flat lined my costs. 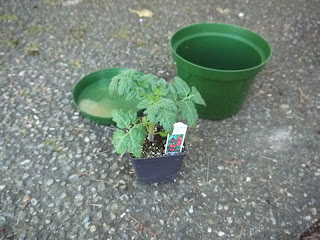 Starting with a little tomato plant and a cheap plastic pot set.
I can't believe how many varieties of tomatoes I could pick from. 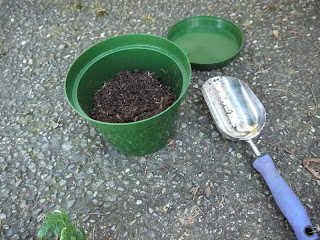 I start by filling up my pot half way with soil ~cough~ which I stole from my mom's garden. You might want to purchase good soil for this instead of randomly digging from unknown location in the ground since you don’t know if it's been contaminated. 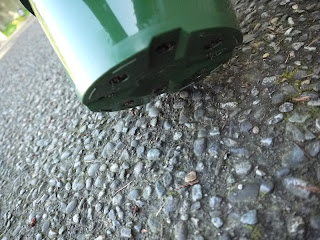 See the bottom of this pot has holes.  This is important for drainage because a plant can die from over watering.  This is why it's necessary to buy a pot made for planting and not something that was just pretty for holding cut flowers.

This is why the plant pots come with two pieces.  The base is to catch all the dripping water.  Also it can work backwards, that if the bottom pan is full of water and the soil is dry, some of the water can be soaked back into the soil through the holes. 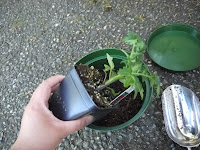 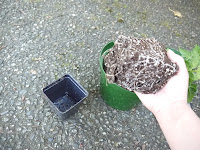 Vola, got the plant out of its travel container 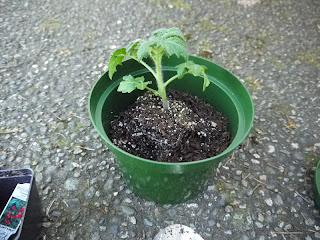 Now put the plant in the pot whole. Don't loosen the soil or roots because it has to adapt to its new environment. It can die from the shock, think of it as a human that was randomly dumped into a deserted island. Next fill up the sides with the new soil. Over the next week the tomato plant will loosen its roots and expand on its own, just let nature do its thing. 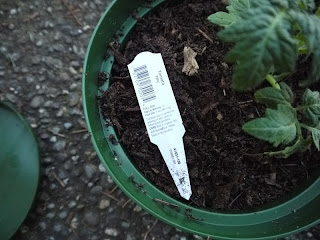 These garden plants or seed packs purchased at the nurseries should come with information with it. Be sure to read them to give the plant the best life it can enjoy, this information can help you pick or avoid certain plants based on the environment you know it will be in.
My tomatoes require lots of sun, and good drainage. 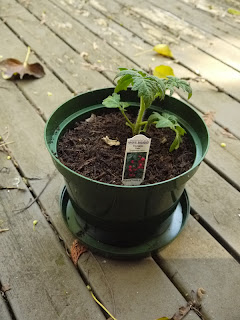 This is right outside my kitchen patio door. Easy access for collecting right before a meal, and lots of sunlight.

Remember: A plant is a living creature. Treat it with respect and your results will be fruitful.


﻿
Posted by SmallRiniLady at 7:54 AM No comments:

I haven't gone on an anime watching binge in a long time, but I wanted to check out the new animes.  Man there is some weird stuff out there this time round, great for me :)  Keep in mind that my choices of anime series are tailored to my taste, there are still plenty of great animes out there of other genres that I haven't covered.  For me I mostly go for Funny and Cute with the occasional Thought Provoking series.

These series are ordered by how much I will end up following it.

Accel World
This series is a technology sci-fi where all humans are basically linked to technology directly.  They can see and type straight to a computer (in our terms) through their sight and mind.  Downloading programs, bank cards, etc are linked to themselves.  This low confidence student is approached by his crush and pushed into accepting a new program which allows him to "freeze time"?  no it's that his mind accelerate 1000x normal time, but that is actually just the side benefit of the program.  It's actually a video game in which he needs to succeed in.  I've only watched the first two episodes, but it looks like the different characters are keeping secrets, and our protaginist needs to grow lots of confidence to succeed.

Acchi Kocchi
This fulfills my Lucky Star fix.  A cute little series just about the interactions between several friends where they go through little scenarios.  It's just a fun joyful series which makes me giddy.

Tsuritama
This series is just bizzar.  You have one student Yuki who has panic attacks when people look at him, and he feels that he's drowning under water.  Another person who says he's an Alien, and loves fishes, and for some reason is drawn/obsessed with Yuki even though he's never met him before.  Following the world of their interaction I have no idea what going to happen but at the end of the first episode you find out they are going to save the world.

Kore wa Zombie Desu ka? Of The Dead (Season 2)
I'm mostly watching this because I watched the whole first season.  It's a slightly strange series of the interaction of a Zombie living with a bunch of girls (Magical Shojo Alien, Vampire, Necromancer). The Zombie just wants a normal life pretending to all those around him he's still just a normal human, but thrown in with different strange girls makes his calm quiet life rather busy.  Not to mention that some times he has to fight monsters in  a Magical Shojo outfit which he finds extremely embarrassing and does not want to be seen by those who would recognize him.

Medaka Box
Medaka is the school president who vows to solve any student's problems 24/7 365 days a year.  She's super ambitious, always doing what is right, while looking down on people.  Her childhood friend is dragged into her plans even though he thinks she's beyond crazy.

Natsuiro Kiseki
The first episode showed us the characters and history of the characters, but not quite sure where they are going yet with their story line.  My guess is their friendship and journey to try to become idols as they try to full fill their childhood wish, difficult since one friend is moving away and also bitter that the rest of her friends are still acting like children instead of growing up and seeing reality.

Saki Achiga-hen episode of Side-A (Season 2)
I was told I should watch season 1 first so I understand the story, so I might take a pause and do that before I continue.  Anyways when I first saw the name of the series I was surprised because it had the same name as that MahJong series, did they make a second season so many years later.  Sortof, apparently they made another series with the same theme, and it looks way cuter.  So I'm going to check it out, but like I said, to season 1 first.

Ok, so with good series, comes bad series.  Remember this is just my taste, but the remaining  series listed here I've watched an episode or two of and decided not to waste my time on.

Mouretsu Pirates
So I was actually quite interested in the premise of this anime.  A high school student who finds out her dad is a Pirate of a Space Craft, and she's suppose to take his place.  Although interesting, I found that the story play was extremely slow, thus found myself skipping along on the video player time bar, and showed that it couldn't keep my attention.  Maybe I'll go try reading the Manga instead.

Shirokuma Café
Animals and humans live side by side, the only difference between the animals and humans is that the animal characters look like an animal and their personality is reflected by their animal characteristics.  The story is about a Lazy Panda who needs a job, but expects to find a job that pays him for doing nothing.  Basically it hit a big Pet Peeve of mine of people who bum around and expect to get stuff with no effort.  If it wasn't for the fact that they used cute drawings of animals instead of humans, this series would crash and burn to the ground. 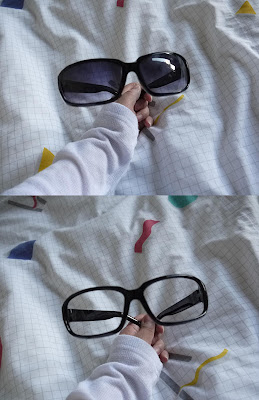 Surprisingly I was able to make a pair in under $2 dollars.  Go to the dollar store and get a cheap pair of sunglasses, anything with thick rims is best.  (At the store you might need to play around with the pieces to see which is loose).  Pop out the lens.  ~YAY~
Posted by SmallRiniLady at 10:03 AM 1 comment:

I randomly whipped this up on Sunday afternoon. I was bored. 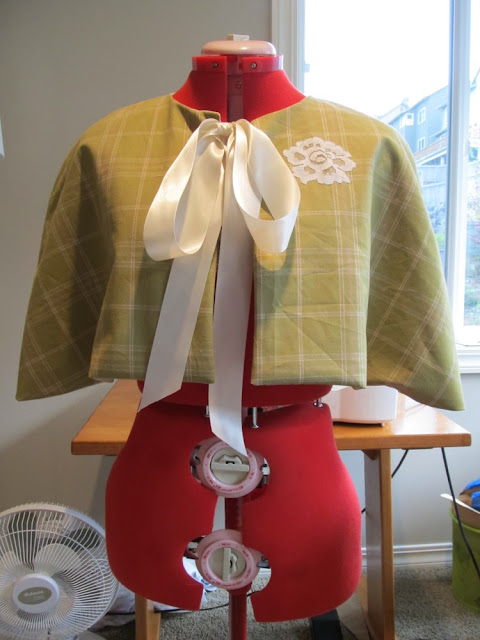 The pattern is the same I previously used for my purple Special Occasion Capelet, only I shortened it about an inch and a half. 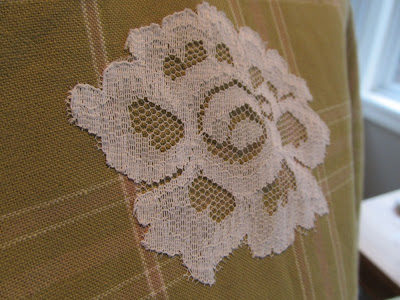 I wanted to add white lace to it somehow; I considered adding trim to the bottom hem, but I didn't have any that looked quite right. But I did have some white lace fabric with big flowers on it and as I was holding it up against the green plaid the flowers reminded me of a corsage. So I cut out one flower and hand-sewed it onto the fabric as applique. 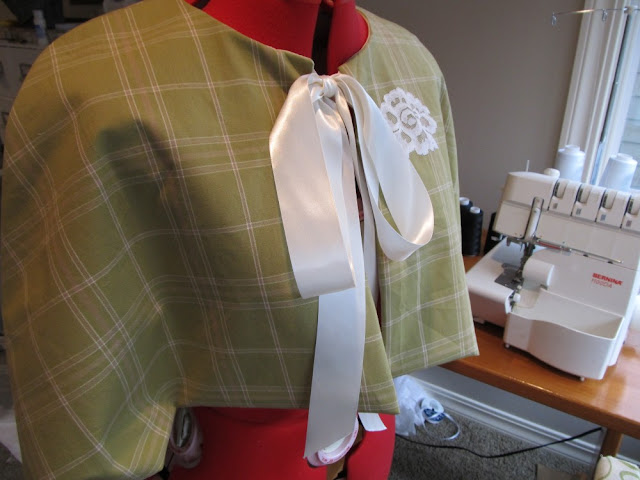 I added a big satin ribbon for a closure. The capelet feels Victorian-inspired. I think it would be fun to wear for tea.

See this capelet on AvalynArtistry.com
Posted by Avalyn at 9:00 AM No comments:

Once again I'm back to present the SmallRiniLady awards for awesome costumes seen at SakuraCon. 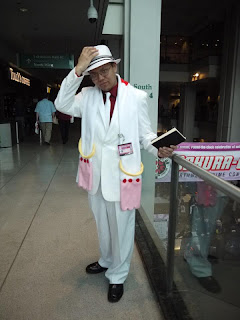 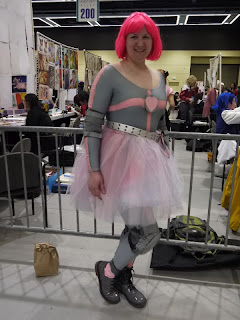 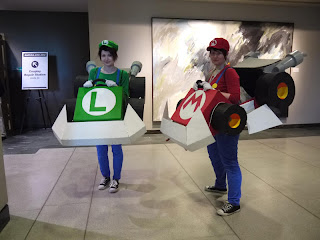 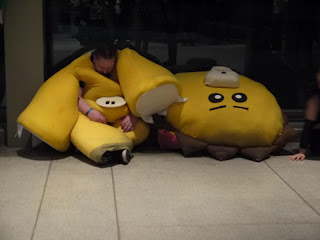 Kawaiiness.  Ok normally it's a little toddler who gets this award, but this year it's a worn out person who was bringing job to con goers dressed up as Kon from Bleach 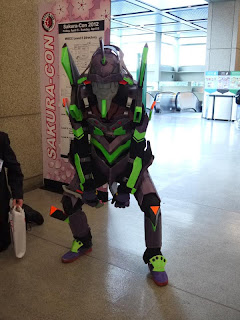 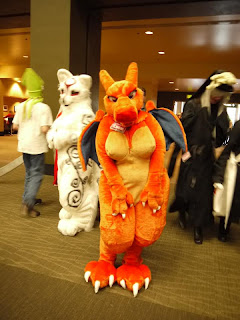 Sexiest!  Look at that pokemon, it's got boobs! 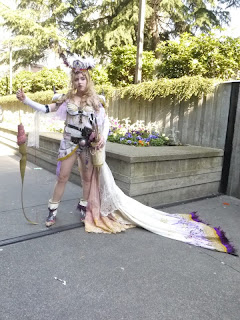 Details:  I was amazed at the details put into this outfit, sorry dont konw what it's from 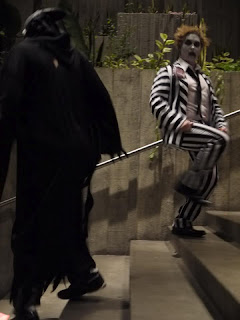 Best character acting:  Sorry this doesn't work as well without a video.  But this Beattlejuice had the perfect voice and walking style as he creeps around. 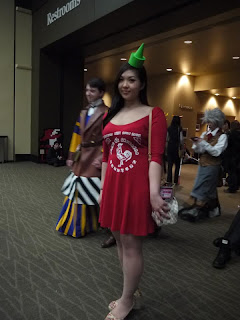 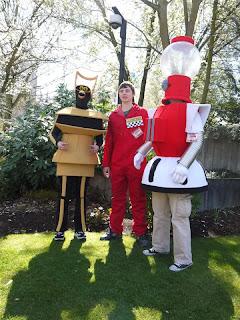 Awesomeness:  Um I'm getting tired, pretend there's a category for this 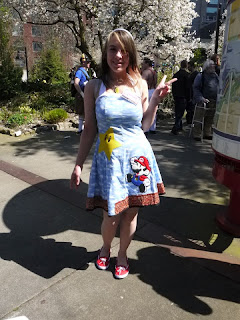 Awesome non cosplay outfit:  She may not be cosplaying, but she totally fits into the scene with all the anime and video game characters running around.  I love that dress, I would wear it normally. 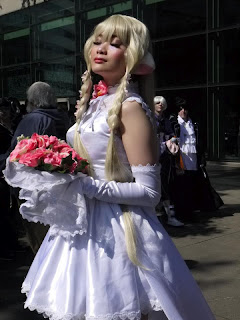 Best Makeup:  Chi ther persacon (computer in the form of a human) had streaks of white makeup to mimic the reflection of her plastic skin.  I was impressed 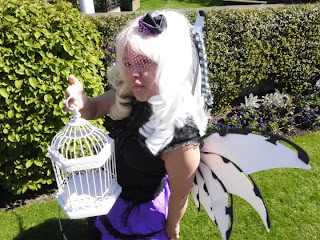 Me:  I thought I would throw in a picture of (1/7) of my cosplays so people knew who was voting.
More pictures taken by SmallRiniLady can be found here
Day 0
Day 1
Day 2
Day 3
Posted by SmallRiniLady at 8:56 AM 1 comment: