More of an unusual post from me, but I had a fun experience so I thought I would share the ideas with others.  This concept can also be applied to a birthday party or Baby Shower.

I created an ABC themed bridal shower.  For the online RSVP system each guest was asked to pick a letter, once a letter was chosen it was taken out of the list.  The letter had to be used when picking out a gift.  Creativity was encouraged.  P for pretty panties, or C for Cherry Candy Cup.  I don't remember what I listed but I hope the point was obvious. 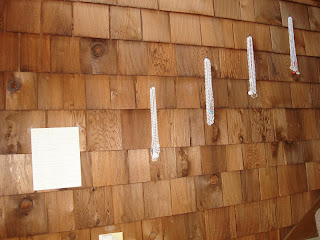 When the guest arrive they were reminded of their letter picks with a simple sheet reminder, and given a necklace with the alphabet letter on it.

This is the first game, that no one was allowed to say the groom's name, and if they did they had to give up their necklace to the person who was first to catch them.  It's a really fun game! 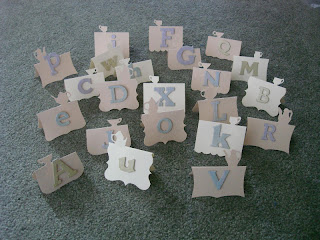 It being a tea party, I made these little place card holders to tell each person where to sit.  It's a great way to mix people up with new people and ensure conflicting people are at different tables. 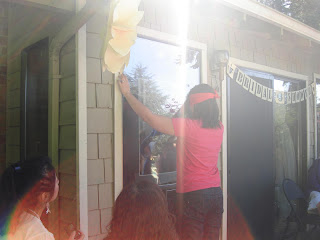 Here is a fun game I hadn't seen before and it was a hit.  Our tea party was on the balcony of my place, so using the window (to limit my cleaning to some simple Windex), I placed a photo of the groom on the inside of the glass, and made a gift wrap over the outside of the window.  I let the bride open the gift, to see that I'm gifting her with his groom ha ha, bad joke.  Now the real fun begins.  It's a take on the rules of pin the tail on the donkey.  But you've got lipstick and need to draw the big kiss on the groom.

Oh by the way that's Avalyn, and she did pretty good with ~kissing~ the groom. 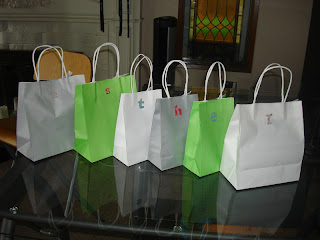 Other games we had were the popular wedding dress out of toliet paper, or guess the answers to the questions from the groom.  As each game ended, the winner could pick a letter from the bride's name, in which they got that prize bag.  Each prize inside was associated with the letter.  I remember that S was a Star-shaped pancake ring.

Hope these give you some fun ideas to create your own themed shower party.
Posted by SmallRiniLady at 10:02 AM