How to Dismantle a Pineapple

This might seem like a daunting task to many people so I wanted to show people how easy this process actually is.  If you are willing to peel and slice an apple, than you can do the same to it's piney counterpart. 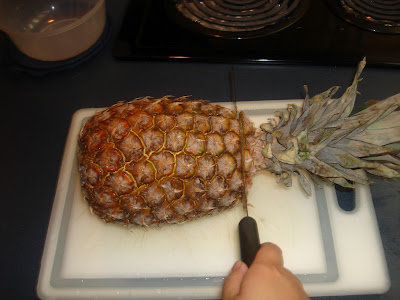 Let's start off with the knife.  Use a serrated knife (one with teeth).  I'm using a bread knife here, works wonderful.

Cut off the Top and Bottom so that you can give it a flat surface to sit on.  Rolling around is not good.

Start peeling the pineapple by slicing down the side of the pineapple.  Yes it will not be round, it won't matter later on.  Yes there will be excess, you will need to trim thicker because of the unevenness of the peel, don't worry cost wise you aren't wasting that much.

Now like a peel apple or a pizza, slice out your wedges.

Like an apple, cut out the core.  Actually you can eat the core, but like an orange peel, people have been trained that eating a pineapple core is not correct.  Yes there are people in the world who eat citrus peels; it's dried then use it in soup, teas, and candies.  The Pineapple core is a lot more woodier so some people don't' like the texture, but that doesn't stop me, I just think "yum more fiber".  If you have a juicer, this is a great time to use it. 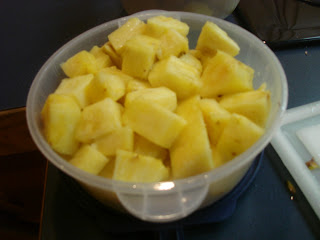 This probably took me twice the amount of time I would use to cut an apple, but I got three times more fruit out of this adventure.

Reasons I prefer to to cut my own pineapple
Posted by SmallRiniLady at 9:42 AM