Dying of fabrics doesn't have to only be done through the traditional soaking method.  Here's some alternative products I've been experimenting with.  I'm testing these on relatively difficult material; using a starched hat, which means it can't be made wet or else it will lose it's shape.  It's also made of felt which has a rough surface. 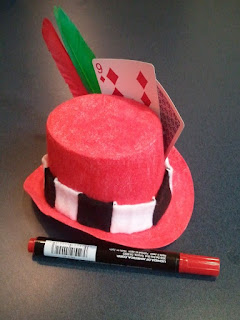 Fabric Pen:  Just like using a marker, you can colour the fabric surface.  The pen was relatively cheap ($4 USD), but at the same time, I ran out of ink before the project was complete.  Because the fabric was rough it definitely ended up splotchy, but consistent across the piece.  One thing that I didn't like was how time consuming this was, remember when you were a kid trying to completely cover an entire sheet of paper with one pencil crayon (aka ColoUred pencil for you yankees). 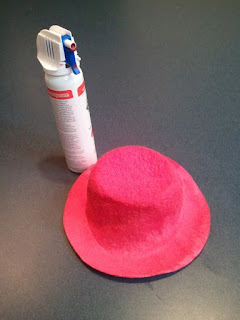 Fabric Spray:  A little more expensive per unit ($6), but cost wise it's worth it because one bottle could cover a lot of projects.  It worked just like spray paint so it was pretty even.  Unfortunately it's very wet, and my hat began to flatten out . . . .  It did seem like a pretty good product to use if I was working with flattened fabrics, regardless of texture 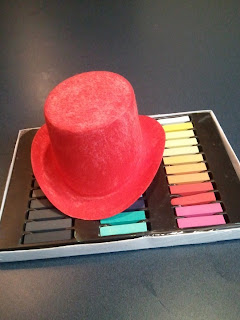 Pastel Chalk:  This is something I just came up with on my own.  Pastel chalks from the art department can be used to draw on the fabric.  The result was slightly better than the Fabric Pen for two reasons.  Because it's dusty, it could get into the layers of texture easier.  The pigment also flakes off easier which made colouring this super fast.  Than seal in the pigment with a spray.  Warning, this should only be used on projects that will not be washed as I do not know how the chemicals in the spray will react with other products.  Oh and as for price, this was extremely cost efficient.  I got this entire set of chalk with every colour for $10 and I only used a fraction of one chalk piece for this whole hat.

Posted by SmallRiniLady at 1:54 PM